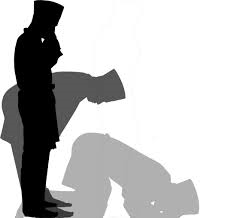 Salah, prayer, is the second pillar of Islam. It is preformed 5 times daily by Muslims and oriented toward Mecca. The timings of Salah are before dawn, afternoon, late afternoon, evining (after sunset) and at night (before bed). The prayers are called Fajr, Dhuhr, Asr, Maghrib and Isha.

Before beginning the prayer, the niyyah, or the intention is preformed. After this, hands are placed by the ears while saying Allahu Akbar (Allah is Greater). Then a person enters the state of Qiyam. In this position, a person is required to stand straight, his feet aligned with his shoulder and hands on his stomach. They are required to recite Surah Fatiha and then any other Surah from the Quran.
After this, hands are placed by the ears again while saying Allahu Akbar. A person is now required to bend down into the position of Rukku’. In this position, a person is obligated to bend his back down, keeping his feet straight and putting his hands on his knees, kind of like touching his toes. During this position, they are obligated to say subhana rabbi al atheem (glory be to god The Greatest).
Following this, a person is required to stand up saying Sami allahu liman hamidah (God listens to him who praises him). Then a person is supposed to say Allahu Akbar and prostrate into the position of Sajdah. In Sujood, a person is supposed to prostrate to his Lord, putting his head down on the ground. While in this position, one is obligated to say Subhana rabbi’ Al A’la (Glory to be God, the most High). After this one should get up saying AllahuAkbar and they now enter the position of Tashahud.

All compliments, all physical prayer and all monetary worship are for Allah. Peace be upon you, Oh Prophet, and Allah's mercy and blessings. Peace be on us and on all righteous slaves of Allah. I bear witness that no one is worthy of worship except Allah. And I bear witness that Muhammad is His slave and Messenger.