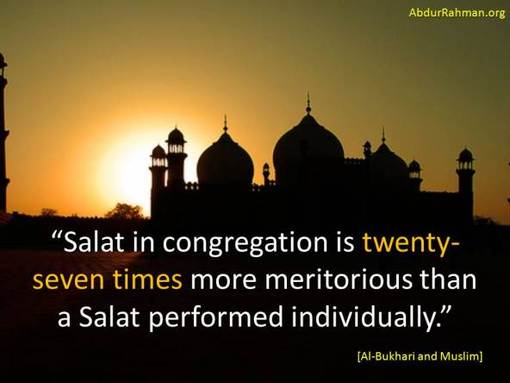 Praying Salah in congregation gives a sense of coming together, knowing each other, friendship, and reinforcement of the bonds of brotherhood. It also leads to righteousness, piety and it spreads a love for doing good deeds.

When praying, Muslims stand shoulder to shoulder behind one Imam asking Allah and supplicating to Him. This shows their strength and unity. Praying in Jama’ah also strengthens the ties of brotherhood between the elderly and the young, the rich and the poor and the strong and the weak.

When conducting research, the author of this paper observed that many people said that that they would rather pray in Jama’ah than alone. The reasons people gave for this was that first of all Jam’ah has more reward and second of all it was easier.

The author also discovered that some families prayed in Jam’ah more than others. From this, the author realized that it really depends on the family. If the entire family gets up to pray together at a certain time, then they will pray in Jama’ah more than a family where everyone is independently doing their own Salah.

All Muslim men are encouraged to perform Salah in Jama’ah in the Masjid (mosque). The prophet (saw) said,” “The prayer in congregation is twenty seven times better (in reward) than the prayer offered by person alone.” (Sahih Bukhari – Book 11; Hadith 618).

The purpose of Jama’ah is to unite the Muslims in one. By meeting several times a day in the mosque allows one to learn to look out for his brothers needs and problems. In this way, the Muslim society establishes an example of social integration and compassion for one another. This allows an individual to feel at ease and secure in their community.