Research has shown that in the body there is an electric current with two poles that run in your bones and it calculates the activities of your cells. Laziness diminishes this current causing a decrease in the bone density, therefore, weakening the bones. Salah is one way that prevents the human body from losing this current because in Salah you exercise your body and keep it from being lazy.

According to Dr. Zakariya Virk and Dr. Mohammed Faruque Reza, MBBS, cartilage is a flexible connecting tissue that is found in many areas of the body including bones and joints. It is unique in being a living tissue with no direct blood supply. The only way this tissue receives nutrients and oxygen is by movements of the joints.  People who don’t exercise and are lazy will end up with dead cartilage that will slowly wear away. This can lead to arthritis and painful joints. Bacteria and viruses find safe refuge in joints for this reason because no blood cell can reach them and neither can any antibiotics. Therefore, Salah has many benefits such as avoiding this problem because in Salah, you exercise your body five times a day preventing it from being lazy.

Though it may sound surprising, just by raising your hands and saying the takbir, you exercise your hand and shoulder muscles increasing the flow of blood towards the torso (the upper body, waist up).

Another incredible benefit is that the takbr and qiyam together are found to improve posture, and balance. This position also normalizes blood pressure and breathing, which provides many benefits to asthma and heart patients due to peace, both physically and mentally.

Quite surprisingly, the position of qiyam is very similar to the Mountain pose in yoga, which has been found to improve posture, balance, and self-awareness, just like Salah.

.       In Salah, when someone perform ruku, extra blood flows into the upper part of the body. This causes the spine to become flexible and the spinal nerves to be nourished. This relieves backache and pain. This action stretches the lower back, thighs, and calves while blood gets pumped into the upper torso. The position of ruku, tones stomach muscles, abdomen and kidneys.

A position of yoga that is very similar to ruku’ is callled Ardha Uttanasana. This position has many benefits that are similar to the position of ruku’ but with no reward.

In the position of Sajdah, due to the increase in blood supply, the brain receives more nourishment and has a significant effect upon memory, vision, hearing, concentration, psyche and all other mental abilities. People who offer their prayers regularly have more will power and can cope with the difficulties of life in a much better manner. They have a less possibility of headaches and psychological problems.


Sajdah also has positive effects on the back muscles because when going into Sajdah and getting up from it, the back muscles contract actively and they become stronger. For this reason, a person who is regular in prayers will uncommonly get a backache.

While conducting research, the author of this paper asked several people if ever treated headaches by doing Sajdah. She found out that many people didn’t even know there was a such thing. Several people said they have tried this and it helped immensly.  This proves that when people pray Salah, they receive benefits to all demensions.

According to Dr. Zakkariya Virk, in the tashah'hud position, a person’s hip, elbow, knee joints, backbone, wrist joints move in a way that it provides a form of relaxation to the entire body. Pressure is applied on the body parts as if it was a kind of massage which releases tension.

Also, in this position, a person sits calmly with his hands resting on his thighs. This stance is very similar to the relaxation position in yoga and has a soothing effect upon one's health. The Prophet Muhammad (saw) used to elongate the position of Ruku’ and Sajdah and he advised his companions to do so as well.

The position of tashah’hud is similar to the thunderbolt position in yoga, which strengthens the toes, knees, thighs and legs. It is said to be good for those liable to excessive sleep. Furthermore, this position assists in speedy digestion, aids the detoxification of the liver and quickens peristaltic action in the small intestine.

There are many physical benefits in Salah. But when Muslims offer Salah, we do it for the sake of Allah alone. The benefits are like appetizers. Our main dish, our main course is to thank Allah (swt) and to obey him and his messenger (saw). This is the main reason why we offer Salah. 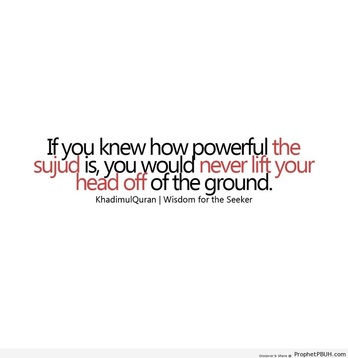